Let’s break that down.

There has been a lot in the news about “pocket neighborhoods” and how people are beginning to reinvent their lifestyles. A Pocket Neighborhood by Wikipedia’s definition is:

A type of planned community that consists of a grouping of smaller residences, often around a common garden, designed to promote a close-knit sense of community and neighborliness with an increased level of contact.

Considerations include reducing or segregating parking and roadways, the use of shared communal areas that promote social activities, and homes with smaller square footage built in close proximity to one another (high density). Features in the smaller homes are designed to maximize space and can use built-in shelves and porch areas, encouraging time spent outside with a focal point around a greenspace (instead of parking areas). Environmental considerations often play a role in the planning of pocket neighborhoods, and those advocating them promote their design as an alternative to the sprawl, isolation, expense, and commuter and automobile focus of many larger homes in suburban developments. 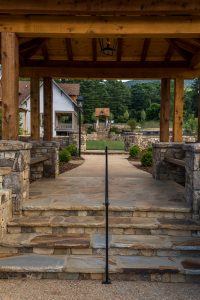 The Jacobs Cottages at The Village of Cheshire is a new idea based on Pocket Neighborhoods that we are excited to bring to western North Carolina. Our concept has been to take the Pocket Neighborhood idea and base it around common courtyards. These small bungalows are well-designed and built to high standards each facing the common terraced courtyards with garages and car-parks are accessed from the roads behind the homes. We are completing the first four homes of phase 1 currently and phase II is on the drawing boards and ready to begin construction. As this project is just in the beginning stages it is hard to visualize the final product. The homes are tightly built but layered landscaping will provide a sense of separation while having close neighbors provides a sense of safety and comfort. Less impact on the land, shared resources, safety, and community wrapped nicely in beautiful well-planned spaces.

We’re very excited to bring this concept to western North Carolina and look forward to seeing the project complete. If you would like to know more about the Jacobs Cottages and the concept of a courtyard neighborhood call us at (828) 669-6657 or stop by the Cheshire Realty Sales Center in the Village Center and let us show you this unique way of living.

Origins of the Pocket Neighborhood: from Wikipedia

The term “pocket neighborhood” was coined by architect Ross Chapin. In 1995, Chapin partnered with The Cottage Company founder Jim Soules to build the first contemporary pocket neighborhood, the Third Street Cottages, in the city of Langley on Whidbey Island in Puget Sound. The Third Street Cottages, a collection of 8 modest 650–1,600-square-foot cottages, were developed to take advantage of Langley’s cottage ordinance, where zoning allowed for double density housing “if the homes were limited to 975 square feet”.

Soules describes a pocket neighborhood as “a group of homes that face and relate to one another around a landscaped common area—the old bungalow court approach.” Chapin also credits Radburn design housing, architect Bernard Maybeck’s Rose Walk in the Berkeley Hills, and early 20th-century cottage courts such as Seattle’s Pine Street Cottages as influences on the pocket neighborhood plan. Pocket neighborhoods often adopt a model of cooperative ownership and shared community responsibilities similar to cohousing communities.

Next article What is a TND?